Japan is one of the country in the world that is most compact with every imaginable tourist attractions in a small place. Having only an area of 377,835 square kilometers, Japan is not short of numbers of attractions to see. In fact being so compact makes traveling through this high-density country of around 128 million people a true delight to explore.

Having 17 UNESCO World Heritage Sites, we can see that Japan has a lot to offer despite its size. Whether you are here in Japan with kids or with friends or solo tripping, you will definitely find it interesting!

Here is our attempt to list down the top 10 Tourist Attractions in Japan for you:

Miyajima floating torii which is located in Hiroshima is one of Japan’s most iconic man-made landmark as an epitome of shrines and spirituality. The torii, a shrine gate, in Miyajima stood out in the water for seven centuries as if floating in the middle of nowhere (but at low tide you will see it standing in mud). It had fascinated many travelers from far and wide and always been a source of fascination. This torii that dates back to 6th century had been a holy Shinto site and is also a Japan’s UNESCO World Heritage Site. 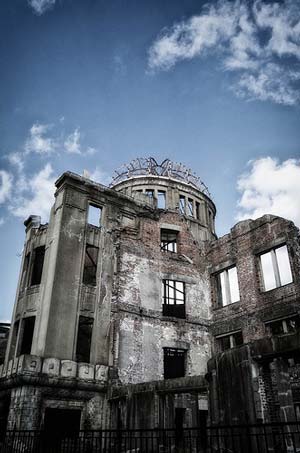 Another must see in Japan is the Hiroshima’s Peace Memorial Park which is dedicated to those killed from the atomic bomb attack. This museum provides a history of the bomb and it also has a curved A-Bomb Dome that stood as a symbol of peace, glimmering especially during sunset.

The most famous Buddhist temple in Japan is the Golden Pavillion, Kinkaku-ji, the golden sister. Ginkaku-ji has a rock and gravel Japanese garden while Kinkaku-ji has a gold-leaf adorned hall, both with beautiful lakes in front of it.

Mount Fuji is Japan’s highest peak, standing at 3,776 meters. It is one of Japan’s most iconic symbols, inspiring many artists and travellers with its almost perfect symmetrical shape. This dormant volcano is situated between Yamanashi and Shizuoka prefectures. During the good weather, Mount Fuji can be seen from as far as Tokyo and Yokohama. Many travelers and locals trek and hike up the mountain during summer. For those who preferred less challenge, you can have a good view on Shinkansen (Japan high-speed train) that runs between Tokyo and Osaka.

This black castle, which is aptly known as the Crow Castle (Karasu-jo), is one of Japan’s famous historical castle. Matsumoto castle is located in Nagano Prefecture not far off from Tokyo. It is a flatland castle (Hirajiro) cause unlike Himeji Castle mentioned above, it is not built on a hilltop or amidst any rivers but just on plains. It is consists of extensive systems of interconnecting walls, moats and gatehouses. Definitely, a castle that one would marvel with.

As the largest and most visited castle, this tourist attraction is another Japan UNESCO World Heritage Site whereby it is located stunningly at the hilltop in Himeji, Hyogo Prefecture. This castle is well known for its finest architecture, comprising of 83 buildings that are the epitome of the advanced defence systems from the feudal period. This castle is also known as the Hakuro-jo (white Egret castle) or Sirasagi-jo (white heron castle) because the stunning white exterior resembles a great bird about to take flight.

This open-air Fish Market in Tokyo is the largest in the world. Come here in the wee hours of the morning to see the fishermen bringing the freshest catch of the day. Then sit down for an early breakfast of the freshest sashimi and sushi in Japan. This is market seems like the unlikely place to be a tourist attraction but it definitely tops to the list for being authentic in local and culture with fresh seafood to boost.

Sensoji temple stood out from the other temples of Japan as being Tokyo’s oldest temple and one of the most significant. This ancient Buddhist temple is located Asakusa, Tokyo and is formerly associated with Tendai sect. According to legend, this temple is dedicated to the bodhisattva Kannon because as the statue was found in the Sumida River and the chief of the village that time, Hajino Nakamoto recognize the sanctity of the statue and enshrined it his home that is remodeled to a small temple for it. One of the famous activity here is the popular matsuri (Shinto festival) – Sanja Matsuri which is celebrated in late spring for 3-4 days.

This out worldly lineups of thousands of torii (temple gates) nearby Kyoto is definitely one experience to be had. Imagine walking down thousands of torii that seems to run for infinity which makes you start to wonder if it will ever end at all. The head shrine of Inari sits at the base of the mountain which is also named Inari at 233 m above sea level. The trails up the mountain will pass through various smaller shrines.

Officially known as Otowa-san Kiyomizu-Dera, this Buddhist temple in east Kyoto is part of the Historic Monuments of Ancient Kyoto UNESCO World Heritage site. Among them, this is the most popular temple due to its architecture. Kiyomizu temple, founded in the early Heian period and finally constructed in 1633 by the Tokugawa Iemitsu, does not a single nail used in the entire temple structure. The name which means clear/pure water is derived from the waterfall that runs off the nearby hills inside the temple complex.

This list is by no mean complete, being somewhat a misnomer as the Top 10 Tourist Attractions in Japan because it is almost impossible for me to get it all down to just 10. Feel free to comment if you have your own take on what is your favourite tourist attraction in Japan. Maybe this can be a series of sorts in time to come since Japan is well given with the tagline of Endless Discovery.